In this post we continue to explore road vehicle aerodynamics with aid of the DrivAer model. This time, considering the benefit of adding grille shutters to improve aerodynamic drag.

The active grille shutters know when the engine, brakes and other components need air and automatically open the air vents. If no further air intake is required, the shutters close improving aerodynamics and reducing fuel consumption.

For this case I re-used the same meshDict as for the external aerodynamics case, just adding additional refinements for the underhood area. Specially around the grid area in order to better capture the small features; which ends up with 9.4 million cells.

For the boundary conditions I’m keeping the same settings as for the external aerodynamics cases, with the exception of adding a porous region.

The porosity properties are added to a certain region of the mesh, the heat exchanger. This region can be defined during the meshing process, or afterwards using the setSet command-line utility.

The most common approach in OpenFOAM is to define the Darcy-Forchheimer coefficients (alternatives include the power law and fixed coefficients). Those two coefficients are added to the sink term of the Navier-Stokes equations, which looks like

where $D_{ij}$ is the resistance of the medium (viscous loss term) and $F_{ij}$ is the inertial resistance (inertial loss term). In OpenFOAM we define the coefficients as two vectors, d and f which are then added to the diagonal of the tensors $D_{ij}$ and $F_{ij}$, respectively. Here you can see a sample of the fvOption dictionary used to define the porosity source term of my simulations.

As I didn’t find experimental values for the pressure drop in the heat exchangers defined in the DrivAer model, I re-used the same inertial and viscous resistance as in the formula student aerodynamics workshop, that is,

The code will automatically multiply negative values with the largest component of the vector and switch the sign to a positive value.

As expected, considering the underhood in the simulation has increased the aerodynamic drag of the vehicle. Introducing the engine bay in the simulation pumped up drag in 13 counts (+5.25 %), while closing the upper grille improved the latter value in about 11 counts (-4.21 %).

Of course, by opening up the grilles, the stagnating region at the front of the vehicle is reduced and so is the pressure drag at the front of the vehicle. That’s why the orange line has a lower peak. With the active grille shutters we have a higher peak at the front; because on the front side of the shutters the flow stagnates —just as in the reference model—, and on the other side we have the engine bay low pressure region, which combined makes the resistance in the front to be greater. We can appreciate this in the following pictures. 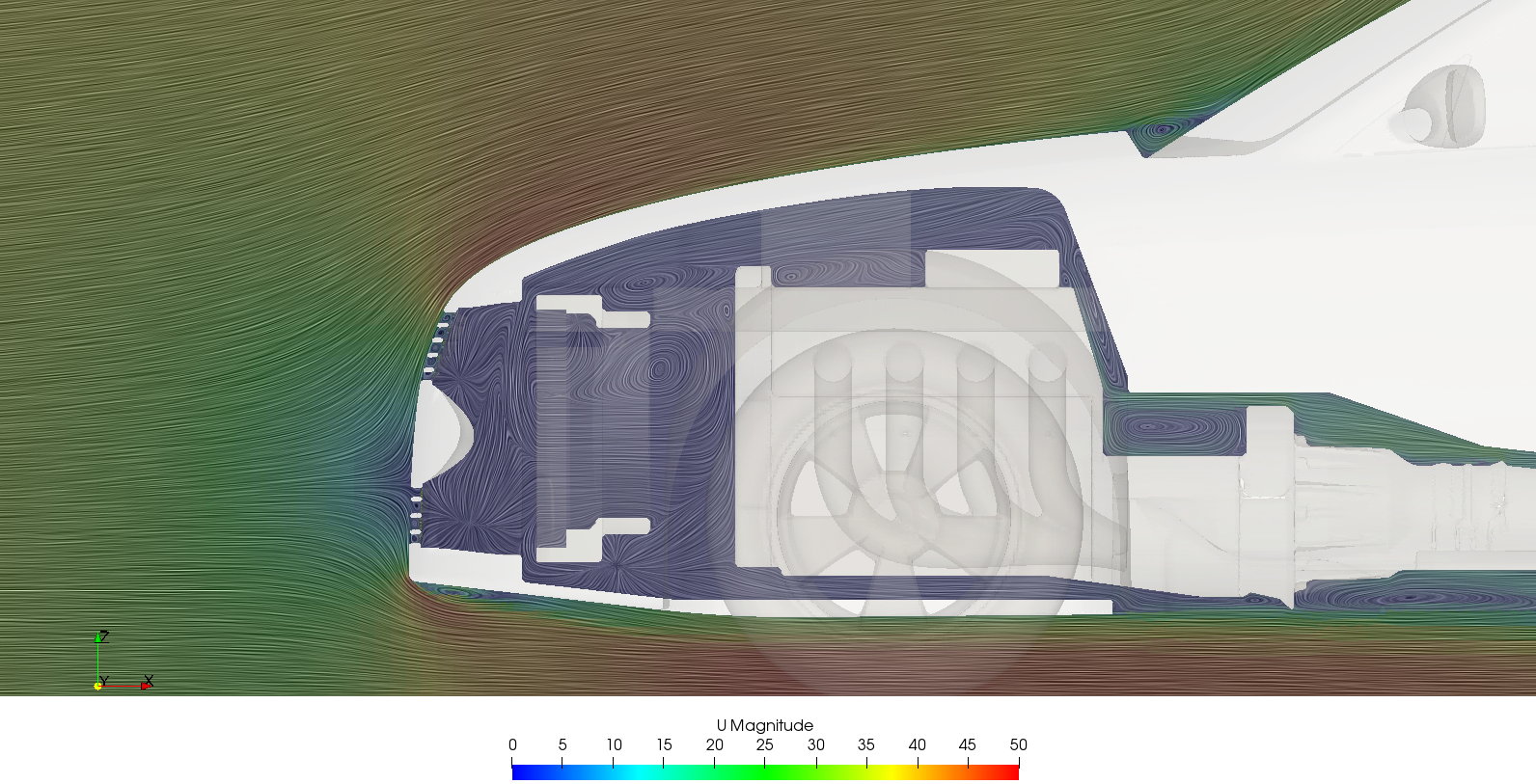 If we consider only the results of simplified models like this one, we might be inclined towards installing this kind of devices on any car; but actually one must also consider heat exchanger performance. Obviously, when the grille shutters are closed there’s no fresh air going through the radiators; but when fully open, real systems include complex mechanisms and elements and reconfigure the flow path inside the engine bay usually restricting the amount of flow available for cooling. So, if the base design is already performing at the lower target boundary in terms of cooling performance, adding grille shutters to improve a few counts aerodynamic drag might not be the best option.