Putting the car on a diet is one of the first to-do’s of any race car enthusiast. And that’s a sensible thing to do. As can be deduced from Newton’s first law of motion, for a given amount of force, less mass will result in a higher rate of acceleration. This, in consequence, would result in faster lap times.

This article arises from a blog reader’s question about Porsche 944s racing in lower categories. Specifically about the influence that removing the rear hatch has on aerodynamics; as in search of a lightweight body, many of the participants decide to remove the hatch, getting rid of 27 “unnecessary” kilograms.

The previous picture shows one of such participants. But,

should we reduce weight at any cost?

On the one hand, we need to transmit the engine torque to the road surface. And this capacity of the tire for forward traction is proportional to the normal load applied to the tire. This normal load is the result of adding up weight and downforce; and is constantly varying.

On the other hand, the maximum speed and acceleration of the car is limited by the aerodynamic drag —among other forces—. Aerodynamic drag is the most limiting factor in straight line performance at speeds well above 100 km/h; but also plays an important role at lower speeds.

This study is based on a previous study on the influence of pop-up headlights on the aerodynamics of the Porsche 944. We take the same geometry —the model retrieved from GrabCAD included a representation of the cabin interior—, mesh settings and boundary conditions, so that results are comparable.

Let’s start with the other hand, aerodynamic drag. The following plot displays the accumulated drag drag coefficient and tells us where drag is building up. It is no surprise that most of the drag comes from the pressure delta between the exterior of the car and the interior of the cabin.

We can also visualize the total pressure to see where the losses are taking place. Just look at how the wake changes by removing the hatch. The flow detaches at the end of the roof, and a big bubble forms when the hatch is removed, while in remains attached to the rear window.

By removing the rear hatch we went from a Cx of 0.369 to 0.385, a 4.33 % increase; a little bit less than turning on the lights. Combining the two effects could potentially increase aerodynamic drag by 10 %; and that, we should notice.

Now, let’s got back to the one hand and see what happened to downforce.

From downforce to lift

Yes, by removing the rear hatch we go from some downforce to having lift. This will reduce the traction capacity of the rear tires and have a negative impact on rear end stability at high speeds —the Porsche 944 follows a FR layout.

In the previous chart we can see that the hatch is generating some downforce close to the rear end of the car, thus increasing the normal force acting on the rear tires. From a Cz of -0.065 (downforce), by removing the hatch and spoiler, we go to 0.097 (lift). 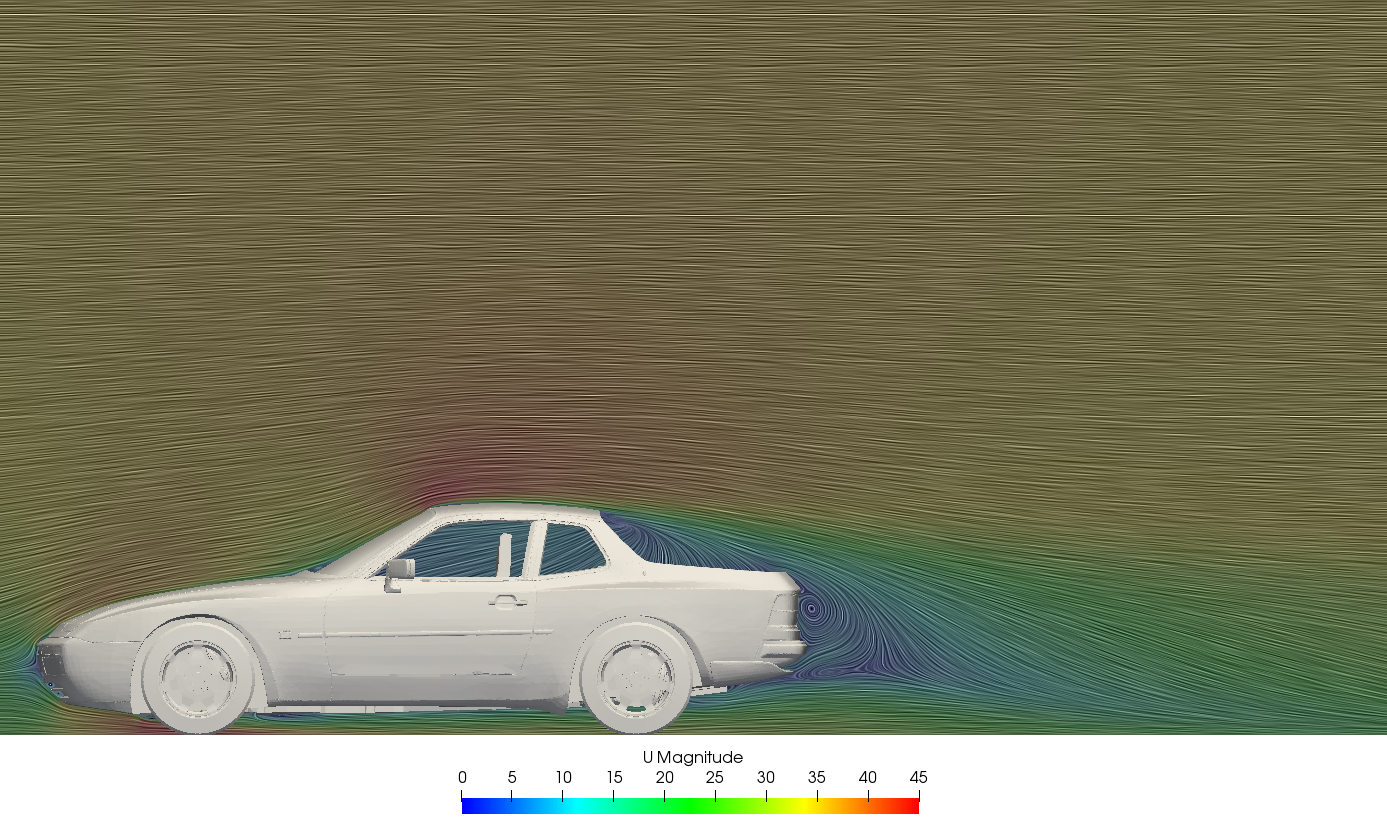 While weight is a feature of our cars that we can easily measure and work on, aerodynamics —not being readily apparent—, is an aspect easily neglected. While it is tempting to subtract 27 kg from the car, by removing the hatch we are taking 55 kg at 126 km/h from the rear axle penalizing the tire’s capacity to produce traction —100 kg at 200 kg/h.

Although the representation of the underbody of the car is not accurate —thus the results are not necessarily representative of the actual Porsche 944 performance—, it is undeniable that the hatch contributes, at the very least, to reducing the lift, if not to generating net downforce. And this is as important as weight. Therefore, a compromise solution —more appropriate than eliminating exposed heavy components—, would be to replace them with lighter materials, keeping the shape and aerodynamic properties.

Schrader, S. (2013). What I Learned From The Most Disappointing Race Weekend Ever. Retrieved from Jalopnik.